As part of the Womenpreneurs4plastics, Women Plastic Entrepreneur Groups – WPEGs – are formed as a strategic means to take forward and sustain the project goals. The membership in groups was guided by certain criteria including but not limited to: women below poverty line, women headed family – single / deserted / widow, women without regular job or access to regular income, interested to take up income generation activities particularly related to plastics and interested to be part of groups and involve in community events. This project visualises formation of about 20 WPE-Groups, which will be instrumental in working with the community. 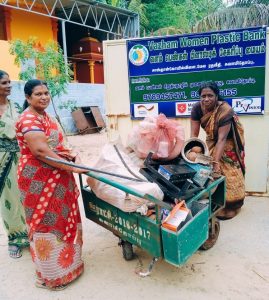 To be more systematic and sustainable, all the groups have internal savings and subscription also. They have opened bank accounts and deposited money in the bank account, that adds safety for the money and also recognition for the groups.

During the meeting the topics discussed include: village environment, plastic pollution and the need to work for protecting the village from plastic pollution, status of women, need to generate income for the members and the group through group activities. Depending on their local conditions, each group takes up different initiatives.

It is also interesting to note that the groups also undertake common activities like celebration of local festivals in their community level with some competitions and participatory events. These event help to build up the group process.

Though the WPE-Groups are at the beginning stage, it was felt that a networking and co-ordination mechanism should be promoted from the beginning. Hence a forum for networking and co-ordination was promoted with one representative from form each group and three staff who would initially lead and guide the forum and in course of time, the people’s representatives would fully take over and manage the affairs of the forum. The forums discussed about the role and responsibilities of the forum in strengthening the WPE-Groups and attaining the objectives of the project.

To be more systematic and gain legal recognition, the network was register as Vazham Women Micro Entrepreneurs Forum in December 2021. The network is gaining shape and the coming years, it will play a pivotal role in supporting the WPE-Groups and managing the plastic banks and recycling workshops by the women groups.